This is the story of my trip from Memphis Tennessee, to Navarre Beach Florida to attend the "Juana Good Time Regatta". It's just over 500 miles from Memphis to Navarre. I had never gone that far in just a weekend before, but I couldn't resist the opportunity to sail the Emerald coast one more time this season. My boat, a Hobie 18 Magnum was in good shape for the trip. Although it's an '81 model, pretty much everything on the boat has been replaced or upgraded in the 9 years I've owned it. Everything that is, but the standing rigging. As far as I know, the shrouds, forestay, and bridal wires are original equipment. The original plan was to leave early Friday morning and rendezvous in Grenada, MS with Lee (aka Capt Teach) with a Hobie 18 and Gill with a Prindle 18-2 and caravan on down to Florida...

I pulled out of my driveway pretty much on schedule after a frantic search for the trailer wiring adapter I needed to plug my trailer into the Chevy van. Unfortunately the illusive adapter was nowhere to be found so I spent the next hour in the AutoZone parking lot rewiring my trailer to match the van. I'm hoping this is the worst setback I experience during the trip.

Back on the road I call Lee to give him an updated ETA and find out that Gill has dropped out of the trip and Lee's vehicle has dropped it's transmission, so it's suddenly become a one boat caravan. Lee still wants to head to Juana's to party, so I stop in Grenada to pick him up and we are on the road again. Nine hours later (including the time to change a tire on the van) we pull into the parking lot at Juana's Pagoda House, it's about 9:00pm and the parking area is jam packed with cats on trailers. Registration is nicely organized, payment of the $50 registration fee nets a wristband for meals and $1 Coronas during the weekend, along with two T-shirts. The wind is howling across the parking lot and several people comment that they "hope it keeps this up all weekend", the term "be careful what you wish for" should have come to mind.

The next morning, after a breakfast of fresh biscuits and muffins, we begin rigging the boat. The wind was so strong that it really interfered with the setup process. I moved the boat and trailer pointing into the wind to raise the mast so I wouldn't break another hinge casting by leaning the mast to the side. The only big problem came while trying to raise and furl the jib. With the wind blowing this hard I couldn't get the sail furled tightly enough at the top to keep it from slightly unfurling and then attempting to flog itself to pieces, very frustrating, waiting for the lull that never comes to quickly furl the sail. (if anyone has tips for raising a Hobie 18 jib in high winds I'd like to hear them)

It was a strange scene on the beach, most of the boats were now rigged and sitting on the beach as time for the skippers meeting approached, but most of the sailors were just standing and staring out at the water. Everyone was silently evaluating whether it would be wise to go out in these conditions.

I was doing some thinking. Looking out over the waterway with my legs braced against the wind I'm thinking about several things. Could I, with limited salt water experience, handle these conditions? Could my 21 year old boat handle these conditions? Could I stand to stay on the beach after driving 500 miles to be here? The answers turned out... "I think so"... "I think so", and NO! so the decision was made. One thing that helped was that Lee had volunteered to crew in the conditions, so with over 500 pounds combined crew weight I figured that at least I'd be able to keep the boat upright, although low in the water. Another factor in my decision was just as important. The area we were sailing is a perfect place to test the limits of your ability safely. The waterway between the Navarre and Pensacola bridges is pretty narrow, sheltered from really big waves by a low barrier island. Both shorelines are soft white sand, so if it was necessary to bail out it would be easy to do. (At least two boats did that very thing, beaching near Pensacola and retrieving the boats with trailers when the conditions became too much.)

The course for Saturdays distance race for the beachcats 18ft and up was straight downwind to channel marker 131 and back. The marker was a little over 16 miles away, it was going to be a wild ride! The smaller cats, including a group of Hobie 16's driven by Boy Scouts from Apalachicola, were given a much shorter course which turned around at marker 121. Here's a map of the course.

After a pretty informal start in which the big cruising cats actually started with their skippers at the bar, downing a "beverage of their choice" before running for the docks, we started the wild downwind run. I nearly gave up and turned around minutes after our start, the boat felt like a bucking pig, with our crew weight exceeding the weight of an already heavy 18 it really took me some time to get the feel for the conditions, but after a little while I began to feel the groove and we started motoring, I mean really flying with rooster tails to prove it. The boat felt constantly on the edge of controllability every minute, we were crashing over waves on one jibe and surfing ahead of them on the other.

As we worked our way down the channel I'm thinking to myself, the wind seems to be building up a bit from the 25+ at the start, in fact it was REALLY building as we approached the elusive channel marker 131. We rounded the marker in just over an hour, to give you some idea of our speed. The strongest winds we encountered all day were around the marker, it was an absolute white-out with the tops of the 4-6 foot waves being blown completely off causing a blinding spray that stung my eyes despite my full coverage sunglasses. Rounding this mark was the scariest things I've done on the water intentionally.

My apprehension had started well before the rounding as I realized that we would then have to sail back up wind against this "dogs off chains" windstorm. I decided that during the return trip we would try to hug the south shore away from the channel where the water was considerably flatter, this would mean a lot more tacks than using the full width of the channel but I thought we'd gain time by not having to bash through the bigger waves. This is where my foresight in growing to 270 pounds and recruiting substantial crew, was paying off. Going upwind against 30+, bashing through and flying over the waves, we were definitely testing the load limits of the Magnum Wings. We were airborne as much as waterborne as we crested wave after wave. I don't know how many times we tacked, but it was a bunch. I was glad I had worked out my weather helm problems earlier this year, the tiller was pulling hard but not unmanageable, a couple of times I caught a cramp in my tiller fingers and tacked early to find relief.

Approaching Juana's we didn't see a finish line and so headed into the beach, very satisfied with finishing the course. We wouldn't realize how rare our accomplishment was until later. While standing by the beached boat preparing to douse the sails I looked out and saw one of the big cruising cats cross the finish line! (it had sailed a much shorter course) I wasn't going to have a DNF after all we'd been through, so we pushed off and sailed out to cross the finish line a little over 3 hours after we'd started. Later, when the results were posted and the stories were told, I found that we were one of only 6 boats out of 17 which completed the long course. At least four suffered broken rudders, a couple of blown blocks or sails, and many suffered so many knockdowns that they gave up. 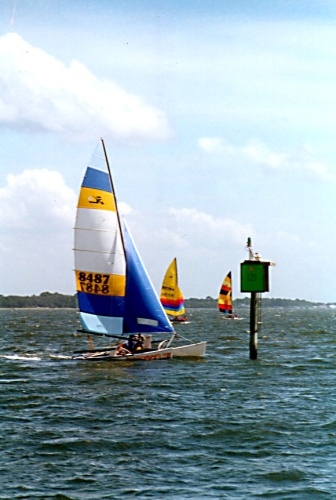 Sunday dawned clear and windy, but after Saturday's Near Gale conditions the Strong Breeze's seemed like a vacation. Sunday's course was Juana's version of triangles, we sailed down and left channel marker 121 to port reached over to a mark set near the south shore, and back to Juana's twice. Here's a picture from Sunday, rounding 121 for the first time.

A lot more boats started the second day with the more moderate conditions, we now had two other Hobie 18's to race against. (no others started Saturday). After a poor start both of them were ahead and sailing well. I was particularly worried about the all white sails on one of the two. Whenever I've encountered an all white Hobie 18 it was usually a serious racer. During the first leg to channel marker 121 which served as "A" mark the three of us crossed several times and were fairly even, although we were gaining on each crossing. We rounded "A" in well ahead of the two other 18's and headed over to the reaching mark, as we started back upwind we really began separating, it appeared the others were having to really depower to remain upright while our weight meant we could power up. That was the last contact we had with the other 18's, at the finish, after almost 4 hours, we finished about 30 minutes ahead of one and 40 minutes ahead of the other. Of course the two Supercat 22's had nearly lapped us, and had their boats put away before we finished!

I hate it when people exaggerate wind conditions when they really don't know the speed for sure, all I can say about the weekend is that looking at the Beaufort Force Scale, the harshest conditions on Saturday match the "full gale" Force 8, with average conditions being Force 7. Sunday was more like Force 6 with a little 7 thrown in.

The best part of the weekend was the fact that we completed both courses without breaking anything on the boat, and no more personal injury than your standard "boat bites" that come with heavy weather. But when someone asked me if I'd be back for Round the Island, I bowed to Neptune and pledged that I wouldn't push the boat in another distance race until I replace my aging rigging, it doesn't pay to push your luck too far.

If your still with me this long I'll make a pitch for regattas everywhere. Whether or not you consider yourself a "racer", try attending a weekend event like this. Beachcat sailors are great people and the local organizers go out of their way to welcome newcomers. It's also about the cheapest sports participation you can do, most regatta fees are <50 dollars for the weekend and include some food/drinks/t-shirts, many regattas have camping available near the site, or arrangements for reduced rate lodging. If you commit to sailing in a regatta, you will meet lots of great new friends and you will sail in locations and conditions you might not have tried before.