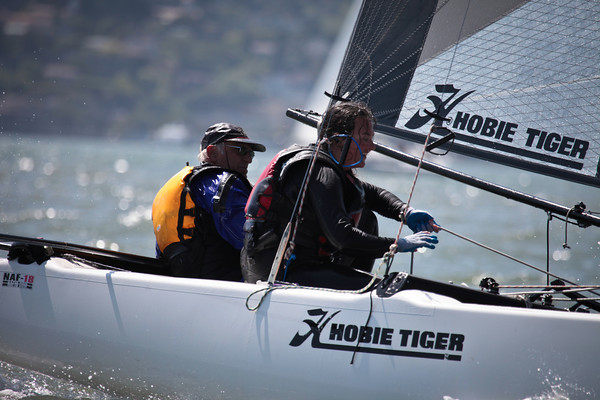 Let's face it, sailing is a male dominated endeavor. The America's Cup, the supposed pinnacle of sailing, has nary one female to be found racing; something I'd personally like to see change. With the Nacra 17 being chosen as the multihull for the next Olympic cycle, and the requirement for it to be sailed with a mixed male/female crew, it's definitely a step in the right direction. Last weekend the F18 fleet in The Bay had two female sailing rock stars join the racing out of the San Francisco Yacht Club. Our good friend Phillip Meredith, who has been racing F18s for almost a decade, weighs in.

It is something you don’t see often enough in our local F18 races. Women racers.

We know the San Francisco Bay Area has a depth of talented racers, both male and female. It is the latter that always seem in short supply at the races. So it was a great boost to the SFF18 fleet to have a couple of really talented women join in the fun at this year’s San Francisco 18 Foot regatta hosted by the San Francisco Yacht Club.

Long time Bay Area Sailor Jody McCormack, who will generally sail on anything, but usually sails on the 18 Foot Skiffs, helped to rocket one of the class stalwarts to a second place finish in race 4. When Jody got off the water, she was all smiles, and obviously excited about sailing the F18, “I was originally going to help with race committee for the F18s, and one of the crew became ill. It was 10 am, the same time as the skipper’s meeting, and I was asked to crew. I got in my car, went home, and got my skiff gear.

We finished rigging, and sailed out to the course. It was my first time on that size catamaran, and definitely my first time on an F18. I’ve done some sailing with Peter Stoneberg on Shadow, and Tuki, but certainly not on a catamaran that light and responsive. The F18 is super fun, but the thing that made the biggest impression on me is the fleet of people. They’re enthusiastic and willing to help each other out. I’ve never been to a regatta where everybody literally took the boats out together. We were sharing tips and debriefing together, so to me that was one of the most positive experiences of the whole weekend.”

Whitbread Race veteran, Katie Pettibone, also hit the water with one of our class’ newer members aboard his Tiger. Katie has multiple circumnavigations, has campaigned with America True and America3 for the America’s Cup, and competed in the Volvo Ocean Race aboard AmerSports Too. She was stoked to sail the F18, “I’ve liked the F18 for a while. I sailed with Pease (Glaser) down in Long Beach, so this wasn’t my first time on the F18.  It reaffirmed my experience that they’re fun, they’re fast, they’re responsive, but you always feel like you’re in control. You can push the edge, but it’s not in a dangerous way. I’ve been wanting to do more catamaran sailing. Way back, a long time ago, I did the Worell 1000, and I always wanted to get back to it. I’m always overwhelmed by the kindness and generosity of the class. They’re really a terrific group.” 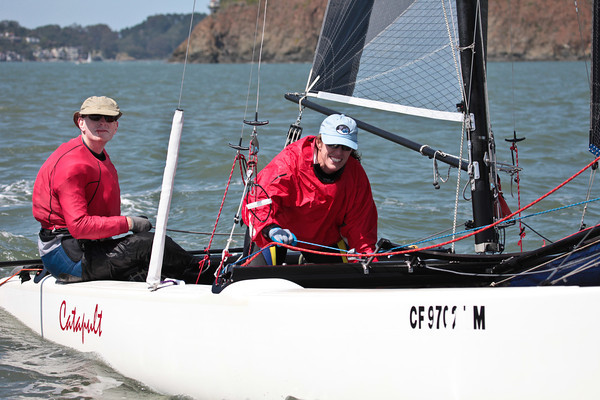 With the new mixed team Olympic Multihull soon to debut, we can only hope that more of the top female talent will join the F18 fleets around the world. It would certainly strengthen the class and no doubt make the racing that much more fun. 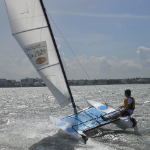 Mixed is the best choice
I agree that a mixed event is the right choice. If the event had been declared "open" it would have been effectively the same as saying men only (as has historically been the case.) If they had made two separate events, that would have not given men any reason to make room for women at smaller regattas. Because the olympics are a mixed event, it behooves men who have even slight aspirations for the olympics to actively recruit women into the sport and that is a fantastic thing.
dennisMe

Mixed events
As far as I'm concerned, Life itself is a mixed event anyway!
All this male dominated cr4p is sooo 1980s.
I hope a lot of the women who've (traditionally) been 'stuck' in dinghies will now get a real chance to campaign a cat!