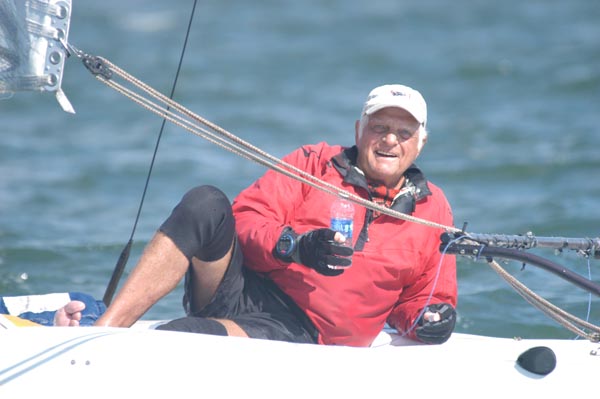 Received the sad news that Rick White, legendary catamaran sailor and promoter has died at 79 at Mariners Hospital in Tavernier, Florida among his favorite sailing grounds, the Florida Keys.

It's hard to overstate the good Rick did for beach catamaran sailing during his life. By the time I started sailing my first catamaran, the Hobie 18, in 1991 Rick White had literally  "written the book" about how to sail it.

He is survived by his wife Mary Wells who shared these words on Facebook today.

Rick White, born April 4, 1937, passed away on January 11, 2017 at Mariners Hospital in Tavernier, Florida after a brief and unexpected battle with non-small-cell lung cancer.

He is best known in the multihull sailing world for his many racing championships, his books and his race-training seminars. But there is so much more

As a pre-teen he was a champion swimmer doing the butterfly stroke. And as a teenager he started driving trucks at age 14. His father told him to just blend in with the traffic, no faster or slower than the rest.

In high school he was an all-state football player being recruited by numerous colleges. He picked North Carolina, but he broke his neck during the first year, ending that potential career. After several years as a successful trucking company owner, he sold that and gave up the suits and ties to become a singer-songwriter-entertainer.

His greatest passion was motocross racing. And he even built a track that hosted many motocross championships.

Lived in Vail, Colorado for eight years, where he was an expert powder-hound skier besides being an entertainer. For one summer out there, he worked as a river raft guide on the Colorado River.

He was an airplane pilot (only crashed once) and for boats he had a 500-ton masters license. He worked for several years as a captain taking groups of people on week-long sailing tours of the Bahamas.

In recent years he has been spending his summers at Put-in-Bay, OH, and his winters in Key Largo, FL.

Rick is survived by his wife Mary Wells, his son David White of Key Largo, FL, his daughter Michelle Coyle of Barberton, OH, his brother William White of Plantation, FL.