The Hurricane5.9SX comes home to Brightlingsea SC. ‘The Church of UK Catamaran sailing’
The 25th edition of the Hurricane Nationals could only be held in one club. So on Sept 27th 28 teams returned to Brightlingsea SC in Essex, to compete as part of the 3rd ‘RegFest’ celebration of UK cat sailing, in the place where it all began with Reginald White MBE.

Just reading the roll of honour surrounding the club bar is a jaw dropping story of Olympic and World Championship glory.

Every fleet has its dark horses, this year they came in the shape of the Charlesworth brothers who turned out to be blisteringly fast in a blow and the recently reunited team of Bawden and Wass with their very tasty red and white Hurricane, which would prove to be smashingly fast....

In recent years the classes coaching programme and uniquely detailed, freely available tuning guide has done much to raise the bar.

So just who would take the title at the church?

Hiram's Haul has been rescheduled for January 5-6, 2013. This will give plenty of time for the sailors to adjust their schedules and make arrangements. There are about 20 rooms available at a reduced rate so get your reservations early and don't forget to pre-register for better pole position.

The next race on the Endurance Series Schedule is the 28th Annual Key Largo Steeplechase on December 14-15, 2012. The Steeplechase is the toughest race of the year starting with a grueling 70 mile leg that sometimes ends in the twilight and ends with a 50 mile technical sprint through a labyrinth of islands and rivers.

Sorry to announce the 15th Annual Hiram's Haul will be postponed due to the latest Hurricane update, showing a small westerly jog to its course late Friday and into early Saturday. This jog is too unpredictable to try a start.

Those who want to cancel their reservations can do so by Thursday at 6pm to avoid a cancellation fee. So please help get the word out to anyone you know who made reservations at Hiram's. However, many of the reservations are those who were not racing so we will be there at the Halloween Party. Come join us for the fun without the work.

We will try to reschedule the 15th Hiram's Haul for another date. Please check the following sites for updates:

This is the 15th anniversary for Hiram's Haul which wil be the fourth round of the Endurance Series.  The event runs October 27-28, 2012. Saturday is a 30 mile catamaran sprint down the Intercoastal waterway to the quaint, old Florida town of Sebastian and Capt. Hiram's for the first party. Spend the night and enjoy Capt. Hiram's or any of the other cozy watering holes. Return the next day with another 30 mile sprint to Performance Sail and Sport for the 2nd leg and overall trophy presentation and party. Grill's Riverside Restaurant has graciously offered to cater the party on Sunday.

The second race in the Endurance Series is Saturday August 4th. Gilligan's Run is about 25 miles which is the shortest race of the series. The race starts at Perry's Ocean Edge Resort heading North to the Main Street Pier then back South to Ponce De Leon Inlet rounding a inlet buoy before turning back north to finish back at the hotel. The exact course is dependent on wind and will be determined the morning of the race.

Notice of Race for GT300 Has been posted.

The Great Texas Catamaran Race is an off-shore beach catamaran race along the Texas Coast. Starting in South Padre Island and finishing in Galveston, the race covers approximately 300 miles along the Texas coast over Father's Day weekend. The race is conducted in four stages with each stage starting and ending on the beach. 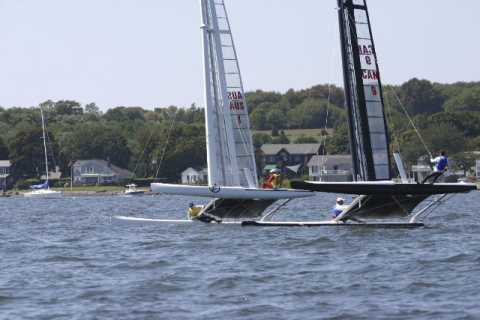 Canadian C Class Catamaran Team of Fred Eaton, Magnus Clarke, Steve Killing, Rob Paterson, and Rossi Milev have been along for the entire ride, one way or another. Clarke, Paterson, and Milev took six months off from their C Class program to manage wing protection for the largest wingmast ever built for a race-boat: BMW Oracle’s (223 foot) 68 metre-tall wing. Reunited in March, their team brought four wings to the International C Class Catamaran Championship hosted by New York Yacht Club on Narragansett Bay this past week.

“Upwind the camber is moderate, but downwind with the flap set at 40 degrees, the wing will produce almost double the force of an equal area soft sail,” explains Killing.

Eaton and Clarke raced Killing’s latest design, Canaan, to a thrilling victory today in the final day of match racing. 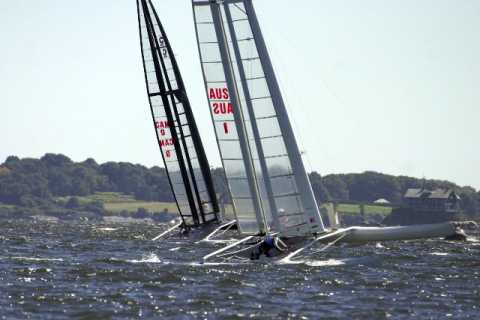 NEWPORT, RI, August 27 -- The wind was light and patchy on this first day of match-racing in the International C-Class Catamaran Championship. Canaan, the black cat raced by the Canadian defenders Fred Eaton and Magnus Clarke, was in her element yesterday, winning three of three races.

Today, was not so smooth. After a significant shift to the south the seabreeze filled in at 12 knots and the third attempt to run a race was a success. More of a success for Alpha however, sailed by Australians, Glenn Ashby and James Spithill.

At the approach to the line Canaan stalled, losing the start and six legs later the first match-race. 1-0 for Australia. In the fleet race designed for the French, British and second Canadian entry, Orion retired. Invictus, of England, crossed the finish line first, and despite powering around the course, just milliseconds after crossing the line Patient Lady VI’s wing tumbled.

It's Canada VS Australia for 2010 Little America's Cup

NEWPORT, RI, August 26, 2010 -- What a difference a day makes. Today was all Canaan all the time at the International C-Class Catamaran Championship at the New York Yacht Club’s Harbour Court. The stars today were the Canadian defenders Fred Eaton and Magnus Clarke, who won all three races, while Alpha, yesterday’s leader, sailed by Australians Glenn Ashby and James Spithill, finished second in all three races. In point of fact, Canaan has won four straight races, winning the last one on Wednesday.

These two teams will match-race tomorrow and Saturday to determine the winner of the International C-Class Catamaran Trophy in play since 1961. This is the 25th iteration of this regatta.

Missing from today’s racing – indeed the competition – was Aethon, sailed by Steve Clark and his nephew, Oliver Moore. Seconds into yesterday's first start, Moore fell overboard and Clark crash landed into the wing, which unfortunately suffered significant damage. They had to drop out of this much anticipated regatta.

Before today's first race Patient Lady VI had some rigging failure, they were towed in to shore and the crew headed back to the race course to observe in an effort to build their knowledge base of the C Class cats. Orion and Invictus  completed all races, often sailing close, but Orion punctured their wing just before reaching shore.