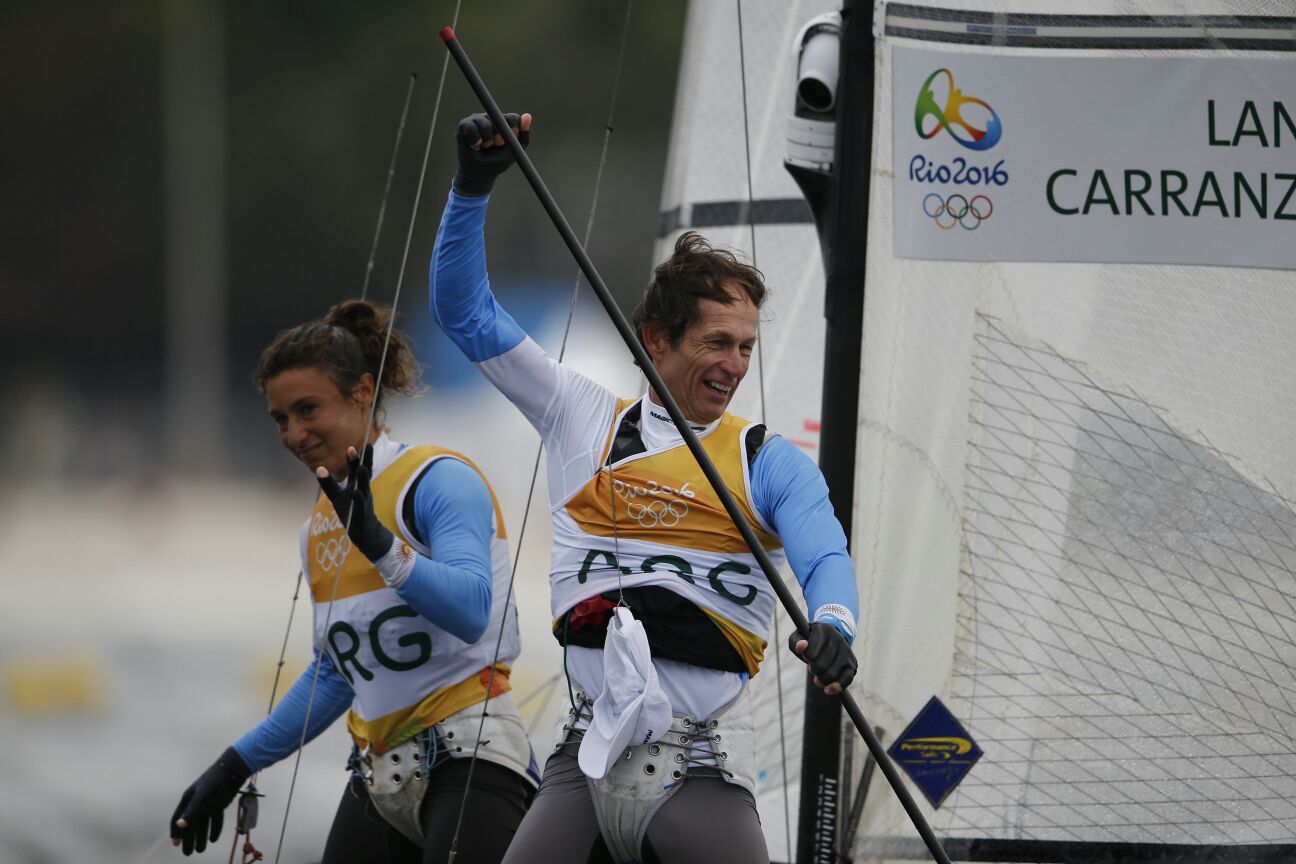 The Argentineans made hard work of the Medal Race, picking up a penalty early on to round the first mark at the back. But they fought back to third by the top of the final lap, only to incur another penalty for sailing too close to the Austrians. After dropping the gennaker and taking their 360 penalty turn, Lange and Saroli rallied to cross the finish in sixth place, just seven seconds ahead of the Italians.

It was a crucial seven seconds that gave gold to the Argentineans by a single point from Australia. The young Aussies crossed the finish behind the New Zealand team of Gemma Jones and Jason Saunders (NZL), but more importantly finished 10 seconds ahead of the Austrians who crossed for third place. Australia and Austria were tied on points, but silver goes to Waterhouse and Darmanin for their superior finish in the Medal Race.

It has been an extraordinary Games for Lange, at 54 the oldest competitor in the sailing at Rio 2016. He has had the pleasure of watching his sons, Yago and Klaus, represent the nation in the 49er skiff, and he has survived cancer in the past year.

Lange says the rigours of his sport helped to save his life and return to competition after he lost a lung to cancer just a year ago. His hectic schedule led to diagnosis of the disease, he said, while the experience of five Olympic campaigns, winning two medals along the way, was key in keeping him positive through his ordeal and returning for a sixth challenge.

Lange, with crewmate Carlos Espinola, won bronzes for Argentina at Athens 2004 and Beijing 2008 in the now discontinued two-person Tornado class event before combining with Cecilia Carranza Saroli (ARG) in 2014 in the Nacra 17 mixed class, a new addition to the Olympic sailing schedule at the Rio 2016 Olympic Games.

But plans were suddenly placed on hold in 2015 when Lange was diagnosed with cancer and eventually had his left lung removed. "The six months I was dealing with that, I was so positive," Lange said. "Now when I look back it was a good experience, difficult but I learned a lot. I was operated on in Barcelona and after five days I was cycling, in a month I was back sailing.

"I was very lucky to find it (the cancer). Probably if I wasn't travelling so much and wasn't so tired it wouldn't have been found. I see myself as very lucky.

"For sure my philosophy and what I learned through the sport helped me a lot. With sailing you learn to suffer in a certain way, to go through hard times and stand up and keep pushing."

Added by DamonLinkous on Aug 11, 2016 - 04:51 AM
Mixed Multihull – Nacra 17, 2016 Olympics
Matias Buhler and Nathalie Brugger (SUI) emerged top of the rankings after two whacky opening races for the Nacra 17 on the notoriously tricky Pão de Açucar (Sugarloaf Mountain) race course. The Swiss are on equal points with Ben Saxton and Nicola Groves (GBR), with Santiago Lange and Cecilia Carranza Saroli (ARG) holding third overall.
With the fleet starting in 10 knots of breeze, the Mixed Multihull fleet shot up the track. But, the breeze was all over the place and no lead was ever safe. The Swiss emerged at the front at one point, only to be swallowed up by the pack at the halfway stage. But then Buhler and Brugger found their way through to the front once more, only to see their 200 metre lead disappear in the dying moments of the final leg. The fleet was closing fast and the top six boats all crossed the finish line within five seconds of each other. The Swiss beat Singapore by a whisker.
"A really tricky day,” said Brugger. "Difficult with very shifty and gusty winds, so we had to improvise and keep the eyes open. We had some hard moments back in the fleet but we were always fighting and had a really good team spirit.”

Justin Liu (SIN) didn't even know how well he'd done until he came ashore. "That photo finish, we've no idea how we did, where did we finish?” he asked the press, delighted to discover he and crew Denise Lim had finished second. "The wind was everywhere, super crazy, we were near the back at one point, but we fought our way back.” Even with a 16th in the next race, the Singaporeans lie in eighth overall.

The British were consistent with scores of 3,5. Saxton was smiling but still not that sure about the secret to success other than, "Give it a go, do your best and hopefully by the end of six legs it will be good enough.

The four-time World Champions Billy Besson and Marie Riou (FRA) had a worrying first day and sit in 17th place in the 20-boat fleet. Besson is carrying a severe long-term back injury and is struggling even to walk any distance, so one can only imagine the pain he is suffering to compete on board the athletic Nacra 17. 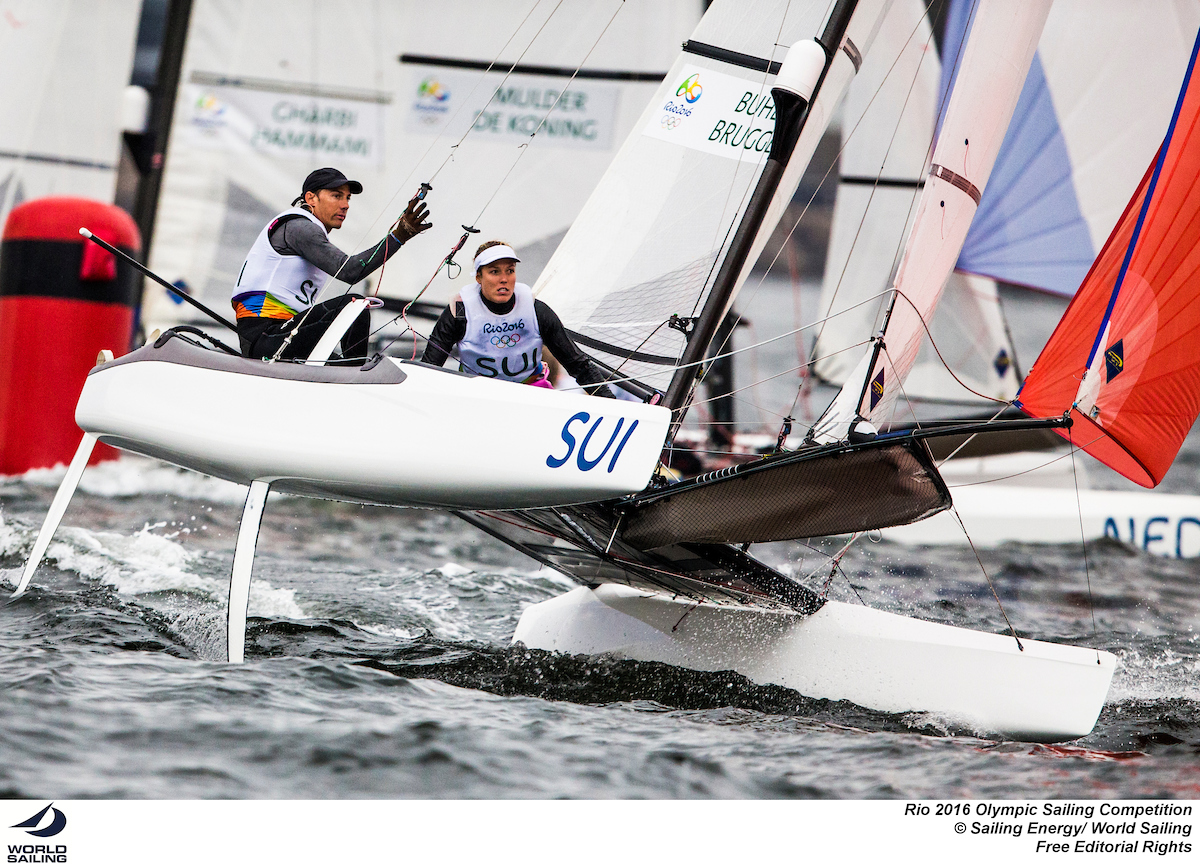 The Florida 300 starts Tuesday, May 17th from Islamorada in the Florida Keys. Race headquarters at the start is the Guy Harvey Outpost Islander Resort.

TheBeachcats.com will be posting stories and pictures each day along the way. The photos will be posted to  the 2016 Florida 300 album at

Videos will be posted to the Florida 300 Youtube channel

Here is a quick list of the start and finish locations, the beach starts and landings can be quite a spectacle so come by and say hi and watch the show, get motivated and join the fun next year!

Start dates and locations: Starting time is 10:00am.

Finish Dates and Locations: Finish times depend on weather and competition, usually between 2pm and 6pm.