The second running of the Florida 300 is concluded and the teams and support staff are either back home or on to their next adventure. For most of the 300+ miles of coastal racing, with surf starts and landings, the teams experienced excellent conditions for their powerful beachcats. No long distance beachcat race is without it's challenges and problems and this Florida 300 was no exception. There were gear failures such as teams Cat In The Hat and SSS Racing who both broke shrouds while racing, and boats capsizing in the rough surf including Team Lupe Tortilla capsizing and de-masting their new Flying Phantom foiling cat arriving at Vero Beach. See more below.

First, the winning team on corrected time for both the overall and open class win was team Key Sailing with Kirk Newkirk and Tom Whitehurst sailing a Nacra 20 Carbon. Kirk and Tom were defending their win from last year and promised to return. Team Royal Yellow with Steve Lohmeyer and Jay Sonnenklar won the I20 fleet and came in second overall. The Foiling Fleet was won by Team Rocket with John Casey, and Colin Page sailing the awesome Nacra 20 FCS 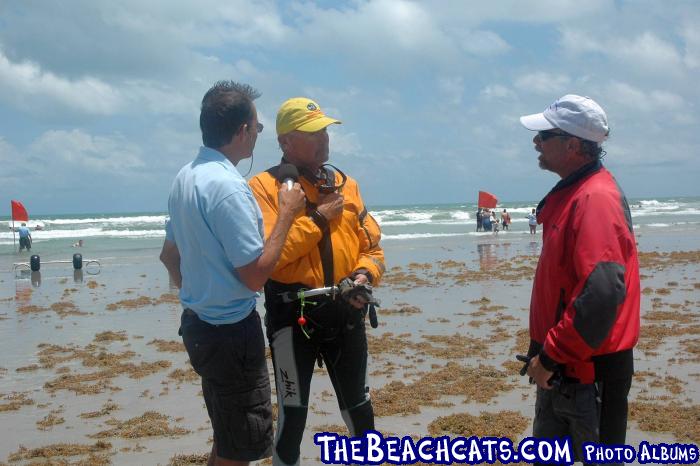 There are many stories from the beach over a four day endurance race like this but the big intrigues from this race was how the new foiling designes would handle launching and retrieving through the surf, and how fast would they really be over long distance compared to the non-foiling beachcats.

The second question had an interesting direct comparison available for reference since the Nacra 20 FCS sailed by Team Rocket and the Nacra 20 Carbon sailed by Key Sailing are virtually the same boat with the exception of the foils. Both boats share the same hulls and rig on a 20ft. x 10.5ft platform, so the speed increase provided by the ability to foil could be observed. The foiling FCS was first to finish every leg beating the non-foiling Nacra 20 Carbon by an average of around 30 minutes despite the foilers starting 5 to 10 minutes later. The shear speed was observed on the water with more than one team commenting on the amazing site of the foiling boats blazing past despite some rough conditions in the open Atlantic.

Some questions still remain about the viability of racing these beasts "off the beach" because after the first two legs of low surf conditions, Vero Beach produced large steep difficult surf. The problem for the foiling boats was the need to turn into the surf and get beach wheels under them before being pulled onto the beach. When the surf was low this was still diffucult as anyone who has stood in even knee-high surf knows how hard it is to maintain your position against the incoming waves. Holding onto a large beachcat and getting the beach wheels underneath while in the surf takes a lot of effort and coordination. It also means that the crew of the arriving foiler must perform a 180 degree turn as close the beach as possible so that the ground crew is in shallow enough water to maintain control.

At Vero Beach we got to see what can happen when the turn is completed a little to far from the beach. When Team Lupe Tortilla turned they ended up with the boat just out of reach of the waiting ground crew, this caused them to miss the opportunity to pull the boat back before the next large wave hit the Flying Phantom while boards and rudders were already pulled up. When the wave hit the boat was turned and immediately flipped first on it's side and then completely inverted, breaking the mast in several pieces in the process.

Other teams had hardships along the way and overcame them, Team Cat In The Hat was demasted during the 3rd leg when a shroud broke but with the help of Team Key Sailing was able to re-rig the boat and complete the final leg. There were bruises, cuts, scrapes, sunburns and "saddle sores" from long hours in the trapeze but thankfully no serious injuries and no boats lost, even the Flying Phantom will be back foiling soon since the main damage was the broken mast and they do have a replacement available.

Discuss the race or ask questions at.
http://www.thebeachcats.com/forums/viewforum/forum/9

See all the pictures from the race at
http://www.thebeachcats.com/pictures?g2_itemId=109100

Footnote: Are you ready for an adventure like the Florida 300? Let's here you comments and questions in the forums.