The big question from Day One involved the two foiling beachcats, the 20 foot Nacra 20 FCS of team Rocket and the 18 foot Flying Phantom of team Lupe Tortilla, would they be so much faster than the Florida 300 competitors that they would run away from the fleet?

Day one opened with a beautiful clear morning on the beach at the Islander Resort in Islamorada, Florida. The competitors were doing final prep and gearing up looking very focused and "in the zone", not a lot of talking as the experienced teams slid their high performance catamarans into the sea.

The start at Islamorada is unique in the four leg race, since the shoreline doesn't lend itself to a beach start the race committee setup a traditional upwind starting line offshore. The leg started in steady winds from the South South-West at 15 mph, clocking more Easterly during the day allowing for the shortest possible route to Key Biscayne. After the start most of the teams opted to hug the shore while three preceeded out a while before tacking. It wasn't long before the boats were pretty much lined up along the Upper Keys and it was a march to the finish with Rocket in the lead followed by Lupe Tortilla then team Key Sailing closely behind.

About 20 minutes after the start team Key Sailing had a tiller tendon come apart so they had to slow down and create a repair using what they had onboard. Sticky gauze tape from the first-aid kit was used for the repair and it held up all the way to the finish. The repair time slowed them down considerably and the defending champions found themselvs at the back of the fleet, not a position where they have spent a lot of time!

In the meantime, after the start all the team crews left Islamorada and started their own race to arrive at the finish line on the beach in Key Biscayn at the Silver Sands Beach Resort before their teams. Being able to live track the fleet using the Kattack tracking software that each boat carries helped take some of the stress away.

It wasn't long at all after the race committee arrived and setup the finish line before the first boat was in site. It was Rocket, and according to the Kattack tracker Lupe Tortilla was next along with Key Sailing a little behind.

In a little while team Rocket with John Casey and Colin Page finished in just 4 hours and 27 seconds followed by Lupe Tortilla in 4 hours, 33 minutes, and 35 seconds. With the tremendous amount of seaweed in the water it was a really fast time for Islamorada to Key Biscayne. Since the two foiling boats are sailing in their own class and not eligible for the overall Florida 300 win, the issue of who would win the first leg of the Florida 300 still remained.

Team Key Sailing had come into view earlier just trailing Lupe Tortilla but was able to pass them before the finish. After overcoming their early mechanical difficulties they finished leg one in first place in 4 hours, 29 minutes, 36 seconds.

So the answer to the big question of how fast will the foiling boats be in a race like this is probably still to be answered. While wind conditions were ideal for most of the race the heavy seaweed caused all the teams to constantly have to slow down and clean up their foils. This was particularly an issue with the inverted T shaped rudders on the foilers. 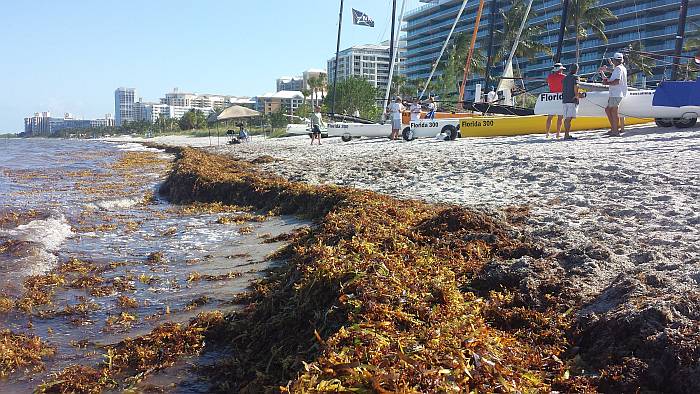 Live video/audio feed from the starts and finishes.
http://florida300.com/live

Discuss the race at
http://www.thebeachcats.com/forums/viewforum/forum/9